To all my lovely followers… I think I have to admit defeat – for the time being at least. I have so many other topics and themes about children and parenting that I wanted to cover but I am not getting to them. I don’t want to say I will never get there – I might! But for the time being I need to be realistic and I find caring for three children, working 20 hours a week and a myriad other commitments means that I don’t have time to write regularly on this blog. I am very pleased with the topics I have covered which in included ‘Why am a stay-at-home mum’, The Parenting Course, birthday ideas and lots of craft ideas, especially the Christmas crafts.

I have always had another blog which is my creative arts blog (tessacase.wordpress.com) – so if you wish to continue following me here, please do. 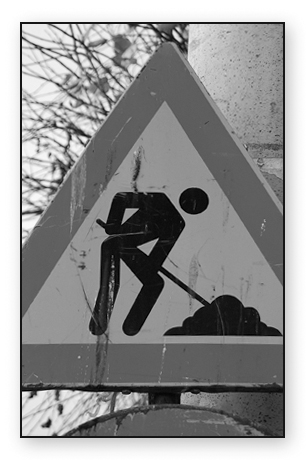 Thanks to all for your encouragement about being not ‘quite’ a stay-at-home. I thought it may be interesting to write some notes about going back to work.

Going back to work has proved okay so far although it has its own stresses but I am so glad I had this time off with my children.

I have recently gone back to work as a part-time graphic designer. By accident really. I was considering returning to work when my youngest went off to school this September 2013 and I had decided to spend January to September doing research into what was available and to update my CV and my design portfolio. I sat down to start research feeling nervous about looking for work but decided it was best to bite the bullet and start. I typed in ‘local graphic design work’. Up came the perfect job – part-time and it sounded so interesting that I thought I had nothing to lose by applying. Instead of taking 6 months to sort out a CV and portfolio, I took 2 days and before I knew it I had secured an interview and was offered the position.

It is exciting but it does feel premature as Ella is still at pre-school however my hours are short and am only working while she is at pre-school. I knew I would not be a stay-at-home mum forever and I have been able to spend just over 7 years without working and it has been so precious.

But my blog – it is all about staying at home – and I still had so much to talk about and most importantly I have loved connecting with mums out there. Am I ‘allowed’ to continue a blog called ‘Stay-at-home mum’ if I am working albeit it very part-time? 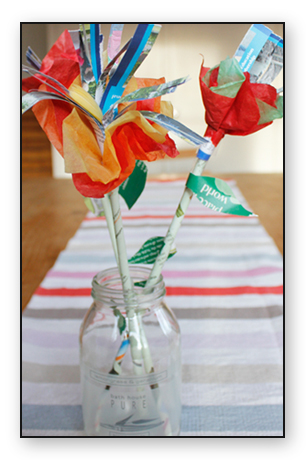 Somehow austerity measures have sunk in and the last two weeks of ‘Buy Nothing New’ weren’t too difficult. Not buying stuff reminds me of when I first arrived in England straight after my studies and lived with two friends – all of us as poor as church mice due to the unfavourable currency exchange with South Africa. We would spend £10 each a week on all groceries including cleaning equipment. And when we went to a pub, the three of us would share a coke as it was all we could afford! I still only use the tiniest amount of toothpaste and little dabs of face cream due to the ingrained habits of scrimping and saving in 1996.

I have found it difficult not to have flowers in the house but found some beautiful paper flowers that the children had made and with some bright red tins, it all looks rather cheerful. We had friends over for supper and they brought lemon yellow tulips which I am enjoying so much – much more than if I had just bought them myself.

I know that some stuff we would have bought has just been postponed but I’m sure we made savings on gifts and by not pouring money on entertainment and easy treats. I did cheat once this week and bought some glue for my daughter who needed to stick sequins.

The challenges over the month were entertaining the children during half term, gifts for others and no flowers in the grim month of February. But it also made me reflect and realise that 100 years ago, people couldn’t buy cut flowers so easily and I have really appreciated the first signs of spring and greenery outside. 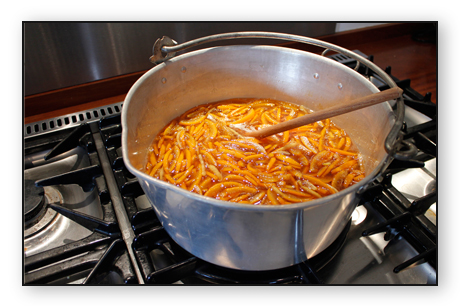 The bleak midwinter is the season for Seville oranges and there is nothing more satisfying on an icy day than working in a steamy kitchen making marmalade to be eaten on hot buttered toast. I had always thought making jam was up there with icing wedding cakes – but it isn’t that hard so go on and give it a go while you can still buy Seville oranges in the shops. You peel and soak the skins overnight hence it is a two-day operation but only needs focussed time for about an hour. You will need a preserving pan or a very deep stew pot. Below is my favourite recipe that I have used for the last 5 years with no disasters.

•    Wash and dry the fruit, and cut in halves or quarters.
•    Set a sieve over a bowl and line it with muslin. Over the sieve, juice the fruit, scouring the peels as you go, and dropping the pips, squeezed flesh and membranes into the cloth. Use a teaspoon to pick up a strip of membrane large enough to grip, then tear out the rest with your fingers.
•    Reserve the juice squeezed from the fruit.
•    Tie all the residue into a loose bag and put it into the preserving pan with the water.
•    Shred the skin as finely as you like and add the peel to the pan. Leave it to soak overnight.
•    Bring to the boil, reduce the heat and simmer until the peel is tender and the liquid has reduced by half – about 2 hours. Cover the pan if too much evaporation is occurring before the peel is tender.
•    Remove the bag of pips and squeeze the liquid out and into the pan. Discard the residue.
•    Add the sugar to the pan, plus the reserved juice.
•    Bring slowly to the boil, stirring until the sugar has dissolved completely. Raise the heat and boil hard until setting point is reached.
•    Skim off any froth, allow it to cool and thicken a little, then stir to redistribute the peel, before potting.
•    Add the whisky just before potting to increase the flavour but don’t worry about consuming spirits at breakfast time – the heat of the marmalade evaporates the alcohol, leaving the flavour.

A bit of technique
•    When the sugar goes in, stir the mixture over a low heat until every grain has melted before turning up the heat. Take your time – undissolved sugar means crystallizing marmalade.
•    Judging setting point takes attention and skill so don’t hurry. Chill a stack of plates in the freezer and heat a tray of scrupulously clean jars in a low oven. Bring the marmalade to a rolling boil that cannot be stirred down. Let it boil for about 10 minutes then take the pan off the heat and drop a teaspoon of the marmalade on a chilled plate. Leave it for a minute then push it with your finger. If it wrinkles, it will set. If it stays runny, return the pan to the boil for another two minutes then test again. It should not be more than 20 minutes in total.
•    Ladle the cooled marmalade into the warm jars and cover with wax paper discs. Add lids only once completely cold to avoid condensation which encourages mould to form. 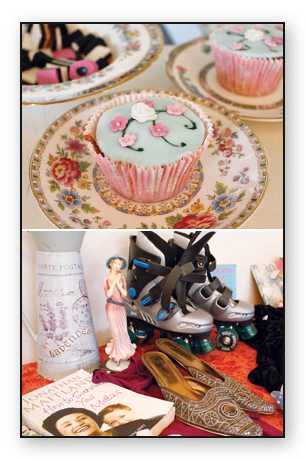 I am half way through the ‘Buy Nothing New Month’ challenge and it is going well although I have a sneaking suspicion that some things I would have bought have just been postponed until March. I haven’t replaced the holey flannel nor bought new kitchen scissors after melting the handles – they still cut. I am REALLY missing flowers as the garden is barren so I can’t pick any and I want daffodils to cheer up the house – any bright ideas? I still feel panicky in case I want to buy a coffee while I am out and know I can’t.

Another challenge is gifts for others – are you ‘allowed’ to buy gifts from charity shops? I didn’t know what to do for my niece’s birthday but a rummage through my gift box revealed a pair of binoculars (free from National Trust). She will be delighted as she lives in a flat in Singapore and loves animals so two perfect uses for binoculars. A girlfriend received a home-made cake and my husband will enjoy his Valentine voucher for a back tickle. Sometimes just saying ‘I love you’ has to be enough, especially in ‘Buy Nothing New Month’.

It was half term this week and we had to find ‘free entertainment’ but baking, playing in the woods and building dens and visiting The Village Cupboard was perfect. The Village Cupboard is a brilliant concept where once a week two pals commandeer the hall and serve tea in quirky mismatching cups and saucers accompanied by delicious cake. Any one can pop in to enjoy a chat and browse amongst unwanted donated items. The price – whatever you think the item is worth and all the money is ploughed back into village projects whether it is to buy pre-school equipment or bulbs to beautify the verges. It is also a perfect way to recycle clothing, books and gifts you no longer want. Well done Lisa and Jenni! 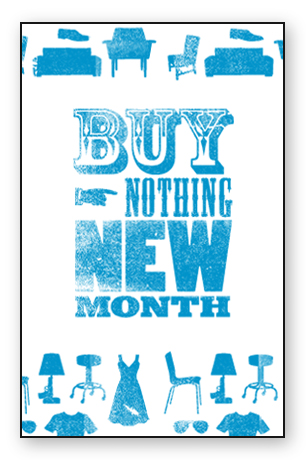 So what is this all about then?

It’s a one month challenge to buy nothing new with the exception of essentials like food, toiletries and medicines. Buy Nothing New Month isn’t buy nothing new ever again nor is it about going without. It’s about taking one month off to think, “Do I really need it?” If I do, “Can I get it from a second-hand shop, borrow it or rent it?”

I visited one of my ‘blog friends’ website a few months ago (Thanks expatsincebirth.com) where I first heard all about the Buy Nothing New Month which is meant to be in October. But I found out too late to participate so thought I would give it a go in February. I would love to encourage readers to do likewise – let me know if you are in! You have a few days to think about it. I have prepared a little and planned my mum’s birthday gift so she needn’t worry! If you join me in this fun challenge let me know how it is going during the month of February. If you think this is radical, it pales into comparison with another mum who has decided to buy nothing new for her child for a year. Have a look at her site at www.freeourkids.co.uk

Visit the official website for further information and tips: www.buynothingnew.com.au (They also designed the great logo above)

Help! I'm a stay-at-home mum
Create a free website or blog at WordPress.com.